A production history spanning over a century

The Veglio Angelo Winery is located in the Langhe, one of the areas of Italy where the cultivation of vines is an ancient, centuries-old craft.

Located in the southern part of Piedmont, where the hills are the undisputed queens, the long strips of land characteristic of the Langhe covered with vineyards and hazelnut groves highlight the territory.
Here, for centuries, small family-run businesses and oenology enthusiasts have cultivated the vineyards according to very specific canons handed down from generation to generation, paying particular attention to the naturalness and genuineness of the wines produced.

The first nucleus of what is today the production company of Veglio Angelo wines in La Morra was born in 1886, over a hundred years ago. In this distant year the progenitor of the family, grandfather Francesco, manages to fulfil the dream of a lifetime: to acquire a plot of land for each of his three sons, in order to allow their families to provide for themselves independently, with work and commitment, cultivating the land. His choice falls on the farmhouse, now a winery, which once belonged to the Gancia family. 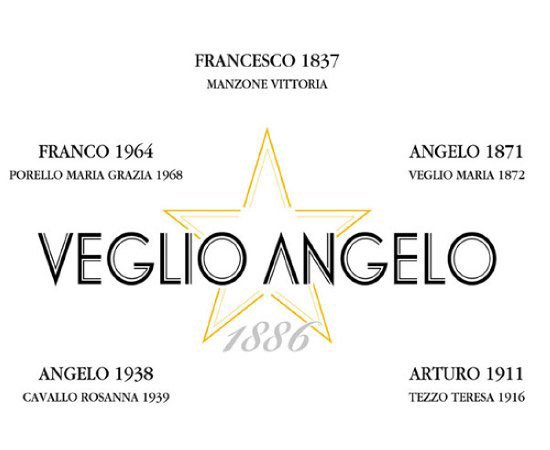 The property would later pass from Francesco to Angelo, his son, officially in 1904, following a division with brothers and sisters.

Angelo, however, had already started managing it well before, assisted by his wife Maria. In the meantime, the estate had been significantly expanded with the introduction of different varieties to grow.

Angelo’s story, like his father’s, is a story of initiative. Thanks to the support of Maria, his faithful companion, Angelo would also have inaugurated a second very important activity for the sustenance of the family: bottling wine – an important moment in the growth of what is today’s winery.

The expansion of the land planted with vineyards in fact allowed the farm to reach the production capacity necessary to dedicate itself to pressing and bottling.

Hence the name of the Veglio Angelo company, which represents the second Veglio generation and the first generation to have created the first bottles.

The testimony and memory of that occasion is still preserved today in the tasting room: one of the first remaining bottles dated 1906.